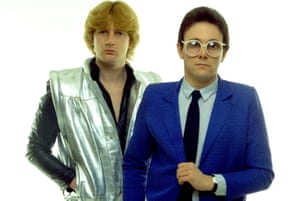 Ever watch one of those VH1, “one-hit wonders” specials, where the random D level commentators start talking about these artists that had one hit, where half of them actually had multiple songs that charted? Random commentator probably has no idea but then somewhere in there Matt Pinfield comes in with his “I’m smarter than you and probably no fun at all” persona and makes sure you know they had another song that charted exactly at #98 for one week in 1984. Well, I’m the everyman’s Pinfield but funnier and better looking. This series will go back to the 80s and spotlight one-hit wonders (in the US), real (truly only one charting hit) or perceived (other songs charted low but they are known for just one song) and come to a definitive verdict if we should accept or reject their status as that one-hit wonder.

I figured I’d start the series off with a true one-hit wonder, The Buggles. We all know the Buggles based off their lone hit song, “Video Killed the Radio Star.” When it was first released by the Buggles in 1979, it went to #1 in multiple countries but only made it to #40 on the Billboard Hot 100 in the US. And the reason we all likely still remember this song is not from radio play at all. It’s of course because it went down as the iconic first video to air on MTV back on August 1st, 1981. However, that was two years after the single was released to radio. In fact, the Buggles released three more singles after that, even before the video got played.

So let’s step back a minute and look at the Buggles beginnings. This duo is actually two names you might recognize. Trevor Horn is on vocals, bass and guitar and would later go on to be part of Yes, Art of Noise and became a big time producer working with ABC, Frankie Goes to Hollywood, Seal and more. Then there was Geoff Downes on keyboards and drums. Geoff would join Yes soon after the Buggles first album, then come back and soon leave again to form Asia.

The band was formed in 1977 by Downes, Horn and Bruce Wooley, with Wooley intended to be the lead singer. Wooley actually ended up co-writing three tracks on the album including their only hit but during the recording sessions he decided to leave and form his own band, The Camera Club. His group actually ended up recording and releasing “Video Killed the Radio Star” first with a faster tempo and more prominent guitar.

The Buggles version of “Video” was released in September of 1979 and got to number 40 on the Billboard Hot 100, capturing a small part of the new wave / electropop crowd initially. They followed that up with “The Plastic Age” (listed as “Living in the Plastic Age” on the debut album The Age of Plastic) in January of 1980 which really would have been their best shot at another hit. It’s the catchiest tune on their debut but pretty quirky and without a true sing along chorus. After one quirky single that easily stuck in your mind a catchy but less appealing follow up simply didn’t cut it.

The Buggles would release two more singles off their debut, “Clean Clean” and “Elstree” which also didn’t chart. Overall, their album got decent reviews and has held up well over time within the electropop genre but didn’t really have any tunes better than “Video” on it (though “I Love You (Miss Robot)” sung through a vocoder is like Neil Young in his crazy-ish period). Horn and Downes started recording the next Buggles record but while in studio they were next door to Yes and were asked to join the band for the Drama album and tour. Yes broke up after the tour and they went back to recording that second album, Adventures in Modern Recording. Right at the start of those sessions, Downes decided to leave and form the supergroup Asia which left Horn to record the album with other musicians, making this sort of a solo record instead of a Buggles disc.

This 2nd Buggles LP was a bit more progressive in nature and experimented more with quirky sounds and off-kilter rhythms. The record itself is pretty solid but very different from the debut and at this point Horn wasn’t really known well enough for anything to get major airplay just by name.

Around the time the album was released, Horn had signed on to produced ABC’s Lexicon of Love album and he was convinced that producing was what he should focus on and thus ended the Buggles. While Horn and Downes have reunited here and there over the years for concerts, as the Buggles, they never recorded another record.

Verdict: One-hit wonder status accepted. Without MTV, “Video Killed the Radio Star” really might have went down in obscurity as well and while both of their albums were solid enough, there really were no song destined to be hits on either of them.