The fun part of these Tidal catalogs now is that they are living documents. As new official records get released, I will go ahead and update them moving forward so that they always stay current. You can reference the original post, here.

On 9/13/19 Korn released their 13th studio album, The Nothing. If you go back to the original post and read my overall review, what you’ll see is that while I’m not really a Korn fan, I liked the albums they made that didn’t stick to their established sound and really pushed some boundaries. What I read about the new record before it was released is that it was a “mature” record, deeply personal and honest as the lyrics reflected upon Jonathan Davis’ wife’s death in 2018 and that it strayed from the usual Korn sound. Since I hated the previous record in 2016, I figured this would be another one I welcome with open arms. I’m torn though. Musically, it’s not the retread Korn bullshit they put out on The Serenity of Suffering but it’s not nearly as different a path as they took on Take A Look in the Mirror. That’s not to say there’s nothing different. “The Seduction of of Indulgence” is just atmosphere and drums which creates a pretty haunting feel. But what really stands out though are the unique vocal stylings of Davis. He’s always been one-of-a-kind but on this he wails from the despair of his wife’s death. Some artists play off tragedy for art but come across as doing it for show. Davis is totally believable on this album. His cries on the opening track and screams in agony on many others and everyone of these feels like a breakdown in the studio. And while that sounds terrible at a human level, it makes for a fascinating experience on disc and after listening pretty closely, it’s hard to imagine how he could possibly fake those emotions. In the end, it’s a pretty engaging album. If you draw a line in the sand which is the nu-metal sound you know from Korn, this album is definitely on the side towards the more eclectic version of the group. Very little on this feels nu-metal but rather a wholly unique rock band making rock music. No matter how my feelings on Korn end up fluctuating album-over-album, I can respect them for continuing to make music that literally no one else is making. 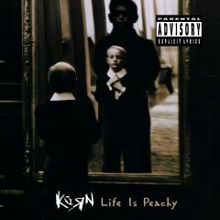 (Edited on 9/14/19 to add the adjusted summary after the release of The Nothing.)

Entrance Point: I was familiar with the singles, Life is Peachy and Follow the Leader in full. This was also the first catalog I did going in with the expectations that I was going to hate it. All other catalogs, I came into either as a fan of the artist or at worst, neutral, so I chose it as a challenge to myself. I had always said I hated Korn and nu-metal in general but then I realized that I’m hating a band off maybe two albums in a long catalog. And well, I do this to myself all the time. I like doing things I normally wouldn’t to open my mind a bit.

All albums ranked on a 10 star scale.

Let’s just start this off by saying this catalog was really the one that blew the doors off this shit and made me really want to go all out and make this a semi-permanent thing. So I have Korn to thank for 250 of these things and three years of my life writing about bands I would normally never go near.

There are just so many interesting things about listening to Korn. I really do think I hated “Freak on a Leash” “Got the Life” and all those other early singles that were instrumental in forming what would then be called nu-metal. God bless ’em though, Korn really had the most unique sound of the 9000 nu-metal bands that cropped up because of two things – the heavy bass right up front in the mix and Jonathan Davis’ scat vocals. I have always liked bands that are unique and well, though nu-metal was mostly a bullshit genre, Korn definitely were the band that really stood out and no one after them really sounded quite the same.

All that said, there were so many surprises with this catalog. The first being that I didn’t hate it at all. That’s not to say I was jumping for joy with each consecutive record but I remember listening at work and having a good time with some of these.

The second surprising thing (and maybe it shouldn’t be much of a surprise) is that the albums that weren’t well received critically and/or aren’t really the ones that the fans of the band think are great, are the albums I like the most. I like heavy music but never bought into nu-metal bands. The early records were very much in that genre but while a group like Limp Bizkit was rap with some heavy riffs, Korn were always heavy first with the hip-hop influences as the secondary aspect. As they slowly started selling less and less records, their sound changed a bit and from 2003-2007 they put out a trio of records that I would call hard alt. rock records and not even falling into nu-metal any longer. Of course, these three would go down as my three favorite records in the catalog.

Take a Look in the Mirror is that first album to change up the sound a bit. Yes, the first single “Did My Time” was a lot like recent singles, the tongue in cheek “Y’all Want a Single” surely does harken back to the nu-metal roots (it surprises me so much that I don’t actually hate this one) and “Play Me” features Nas, so it’s definitely rap oriented but the rest of the disc is heavy rock music with very little rapping or scatting and a lot more of Davis singing. The band has publicly stated they hate the record. I see no reason to. They also stated that this was a back-to-basics nu-metal record, which I don’t hear either. Which means my ears are off or they failed to accomplish what they set out to. What the record does though is really blend the nu-metal and hard rock together to create something that wasn’t the norm in the genre.

And, here are the other two of the unholy trio that I really do enjoy. With Untitled, you have the most unique record of their catalog. The record was labeled in the press as sort of a mid-life crisis disc with the band really experimenting too far with their sound. A few things were different here. Head and David Silveria (drums) were gone and the band was a three piece and so they brought in a weird pairing with Terry Bozzio from Missing Persons on drums. They recorded eight tracks with him, then apparently he started getting really demanding and they canned him and brought in Brooks Wackerman instead.

The other piece that’s different is that instead of producing the album themselves, they left the entire thing to Atticus Ross. If you know Ross’ work, especially now with Trent Reznor, you’ll understand that he brought a lot of atmospheric electronics to the mix. The third single, “Kiss” doesn’t sound like anything the band had done before. It has a piano melody in it, angry industrial noises in the background and lots of atmosphere. Without a doubt, Untitled is out of their comfort zone which might be why I like it so much.

Though their debut really was the record that introduced the world to the band, Life is Peachy is the album that pushed them a bit closer to the superstardom that they would obtain after releasing Follow the Leader. I hated this record when it came out and I still don’t like it much today. It’s very much the sound they are known for but the record as a whole is a jumbled mess of awkward squelching riffs, Davis’ mix of screaming, scat and whispers and hip-hop backbeats. And I want to puke every time I hear Korn and Chino Moreno cover “Wicked” by Ice Cube. That’s the blueprint on how to destroy a great song.

At some point, these guys matured a bit and moved on from “A.D.I.D.A.S.” (All Day I Dream About Sex) and anthems to punch walls to, to well crafted songs (if nothing else). But this is some crazy brainless shit here.