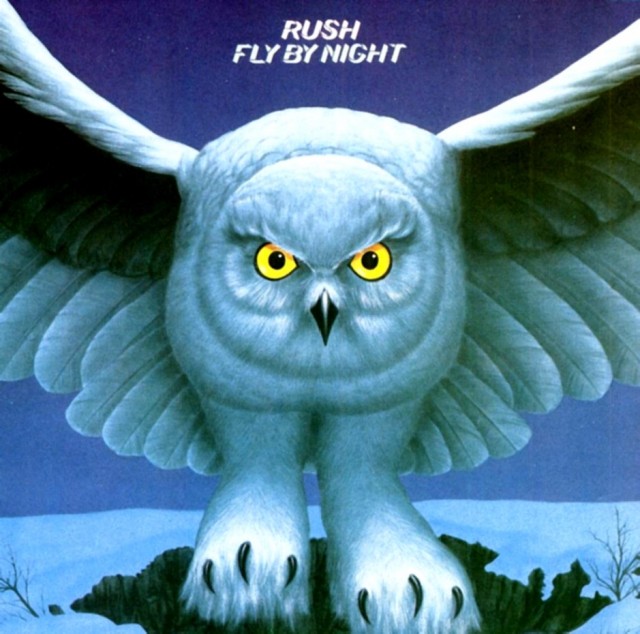 Entrance point: A former roommate of mine listened to Rush every day and I was woken up many mornings by the sound of tunes from Moving Pictures and 2112. I knew their 80s works and enough of their catalog to make me dangerous. But I have never really liked progressive rock, so Rush is not a group I would normally hunt out material from.

Fly By Night is not the record I thought would be at #1 going into this trek. It had a few things going against it.

Somehow though, Fly By Night is my favorite Rush record. The debut is a rock record with very little of the progressive tendencies they were known for. But as they brought Neil Peart on board for this record, they started incorporating some progressive elements to their songs, so this is really the starting point for the sound they crafted for the next few decades.

A lot of this is pure rock and roll, sometimes I get a Zep feel, sometimes a bit of AC/DC as well. The 1-2 punch of “Anthem” and “Best I Can” open the album, with their first real recognizable single in “Fly By Night” opening up the second side are highlights on the record. But it’s really the first progressive suite on their records, “By-Tor and the Snow Dog” that really caught my ear right away. It’s a four part suite, with part III actually broken into a four separate parts with Neil Peart’s fantastic drumming really anchoring the tune throughout.

This is also the album where Geddy Lee really started getting his voice for the sound. Lee has somehow maintained the same quality vocal range over the course of his entire career and while he sounds young here and slightly grittier than he would on future records, you definitely know it’s him.

In 1982, Rush released Signals, which took a pretty drastic turn into using snyths at the basis of their sound. Their regular producer, Terry Brown, really wasn’t the right guy for the change, so they brought in Peter Henderson to take them in this new direction on Grace Under Pressure in 1984. Apparently he just couldn’t make up his mind on a lot of things, so while he’s credited as the producer of this record, the band did most of it. And with that, they likely got the exact sound they wanted.

With Grace Under Pressure they scaled back slightly on the keyboards, though they are still prominent and brought back a lot of rock guitar. This album sometimes gets labeled as progressive new wave, which really isn’t true. It’s definitely a progressive rock record as a whole.

The first half of the record contains pretty brilliant rock music. “Distant Early Warning” is a great rocker, followed by “Afterimage” which has a killer snyth hook in it. Though my favorite song (and one of best of Rush’s entire catalog) is “Red Sector A” which of all their tracks, I think really combines their new keyboard heavy sound with the rock guitar the best. As far as I know, it’s the only song about concentration camps during the Holocaust that I can sing along to.

Rush started in 1968. Clockwork Angels came out in 2012 and is their final album. Forty-four years after they formed, they release their heaviest record ever, possibly their only progressive metal record. And they sound awesome doing it. There are probably a handful of groups, if that, that could say they were making music 40 years after they debuted that was at least as good, if not better, than most of their catalog. So congrats to Rush for that, for damn sure.

Clockwork Angels is heavy as hell. The hard hitting openers of “Caravan” and “BU2B” foreshadow what’s coming down the pike for the full record. Lee’s bass lines are crazy heavy and Alex Lifeson’s guitar solo in “Caravan” is pure shredding. A highlight of the record simply has to be the incredible bass work from Lee on the title track. All of this heaviness blows you away right up front in the first three tracks, but it certainly doesn’t let up as even more melodic tunes like “The Wreckers” still feel heavy due to what’s surrounding it.

Like I mentioned above, I expected this to be #1 due to the amount of times I had heard it (and enjoyed it) and of course, being mesmerized by the album commencing with the brilliant riffs of “Tom Sawyer.” And it’s a great record, don’t get me wrong but obviously there are ones I like more. But, still to this day, how great is “Tom Sawyer?” It has to go down as one of the greatest rock songs ever written and Neil Peart’s drumming is fucking crazy on it.

But of course that wasn’t the only single on the album, as one of their other most well known tunes (“Limelight”) is on this record as well. Beyond either one of them though is the massive guitar lick in “Red Barchetta,” a song that starts off like a melodic pop song then hits you over the head with a vicious riff and “YYZ” which is a masterclass in how to create a progressive rock instrumental that completely stands on its own a song.

Yes, after detailing out some moments on the top record, I did just jump 22 records down the list to Roll the Bones, their 1991 pop record. And I stop here to point out that even though Rush ended up being a great band, not everything was candy and flowers all the time. The early 90s swallowed up Rush just like it did so many other great bands. In trying to stick with the times they took virtually all the edge out of their material and wrote pop tunes. Start with “Bravado” to get an understanding of this. The track doesn’t really resemble a Rush tune in the least bit and while it was probably pretty good for radio, it feels like the band kind of gave up. But the worst is the title track, in which Lee and Lifeson created a generic funk-rock song which Neil Peart also managed to write a rap for. The band couldn’t decide if they wanted an actual rapper on the track, so the voice you hear is just Geddy rapping with a lot of effects to alter his voice. I’m honestly surprised this album didn’t derail their entire career and that somehow, they followed it up with the brilliant Counterparts album.